The Minnesota Vikings brand relies on powerful, quality imagery, generating thousands of photos every game. With their old digital asset management system, it could take up to three months to make those widely accessible. With the Widen Collective, those gameday images are available in 24 hours.

The Minnesota Vikings are an American football team based in Minneapolis, Minnesota. Founded in 1961, they’re one of the National Football League’s most established and recognized franchises.

For this blog post, we interviewed Zach Tarrant, archive coordinator for the Vikings. He’s in charge of managing their photo database, including historical photo assets, serves as a second photographer, and deals with Vikings historic artifacts.

Unfortunately, the old system didn’t make it easy for Tarrant and his team quickly find that perfect picture. The old system contained duplicate files in multiple folders and stored multiple versions of the same asset to provide original and high-res files.

With an extensive reach, the Vikings brand works with many outside groups. From promoting the new U.S. Bank Stadium to community involvement, their creative team fulfills a lot of outside image requests to ensure their high-quality imagery is used. But this common use case of fulfilling image requests was also a huge pain point.

Their old system supported cataloging assets into folder trees, but it did not write metadata to the asset. Once an image left the system, all that helpful information about the file was lost. That left people receiving the files without context.

“Everybody was unhappy with the previous solution across the board,” Tarrant summarized. 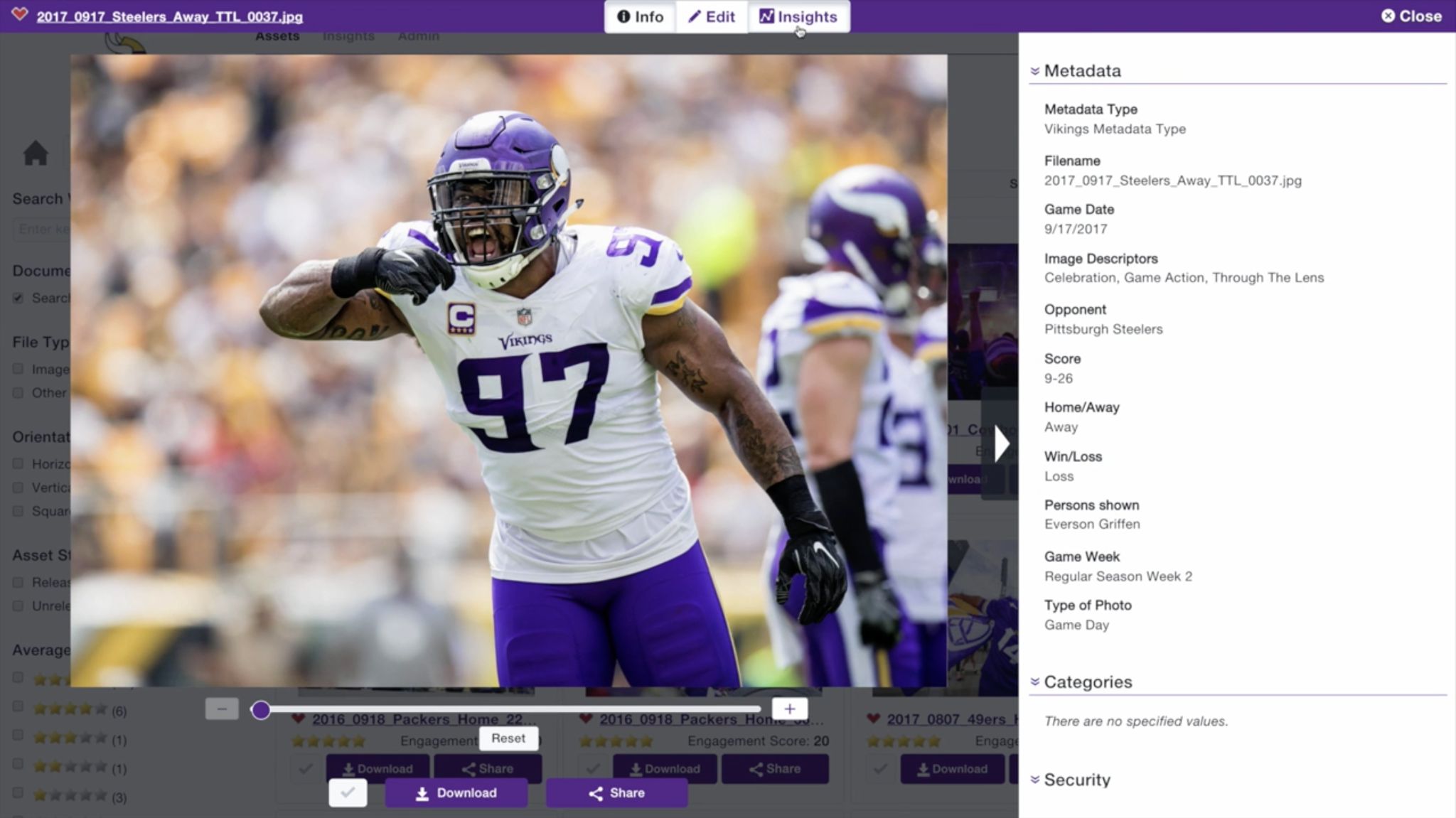 One of the first responsibilities for Tarrant after starting his job with the Vikings was to replace their current DAM system. “I really did my due diligence,” Tarrant says. “I compared and contrasted a lot of different products out there, and Widen was the winner.”

The Collective’s robust handling of metadata supports the volume and granularity the Vikings need to leverage their great imagery. It helps make even the most precise searches possible.

Tarrant highlighted the possibilities metadata gives their teams by saying, “You don’t know what the story is going to be. A writer could be developing a story about two players’ friendship. Now there’s a story about these guys and all you have to do is type their names in and, boom, there are photos of them together in games. That would have been really hard [with the old system]. Now it takes me two seconds to fulfill that image request.”

“It’s totally changed our organization’s ability to leverage our great imagery,” Tarrant says. Intimate knowledge of a folder structure is no longer required to find assets. All of their teams, including administrative assistants, sales, marketing, and the creative team, can self-serve their image requests. The social media team has really taken advantage of the Collective. “They love it. The numbers in the reporting on Widen prove they love it.”

In a little over a year, the Collective provided 60,000 asset downloads. But Tarrant pointed out that the volume isn’t the only success metric. “If you can find that one perfect picture in that perfect moment that helps us tell our story, then we’re doing our job. That’s the point of this whole thing.”

“If you can find that one perfect picture in that perfect moment that helps us tell our story, then we’re doing our job. That’s the point of this whole thing.”

In the old system, a specific search, like a photo of two players together in a game, was very hard to find, if not impossible. Now, it takes two seconds because they can leverage metadata and search capabilities in Widen.

The Collective and Tarrant’s team’s workflows have also vastly improved the turnaround time for gameday photography. Instead of three months, “now they [internal Vikings teams] are getting whatever they want a day after the game. Every game. It’s a huge difference.”

The Collective allows Tarrant and his team to quickly categorize and group data. He builds collections of photographs, like the top 100 stadium photos, to deliver the best photos.

The Collective has made such a difference for the organization that Tarrant said, “There’s no doubt in my mind that every sports organization needs a DAM solution.” He added, “There is going to be more and more data to manage all the time.”